Thefts from auto: the plague of the inner city

You see this all the time: the smashed car window, the puddle of glass fragments on the street; somebody's done a smash-and-grab on a parked car. When it's your car, you not only face the loss of whatever's been stolen, but the expense and trouble of getting your car window replaced. The creep who did the deed may get less money for the stuff he's stolen than it's going to cost you to repair the damage he did. 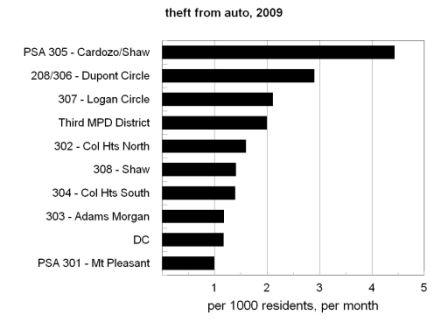 This is the most frequently occuring crime in this area: 12 a month in Mount Pleasant, 32 per month in Columbia Heights (PSA 302). As infuriating as the offense is the knowledge that the perpetrator is virtually certain to get away with it. The police, busy with more serious crimes, spend little time on automobile break-ins. Forget fingerprints, or any other such forensics. Forget anyone trying to trace the fate of your stolen belongings. The police take the report, then file-and-forget it. Yes, occasionally one of these thieves will be caught, generally because someone spots him in the act.Even that's a long shot, because he'll be done and gone before the police get there.

As in other matters of crime, your best defense is to be city-smart, avoiding being a victim in the first place. That means, simply, leaving nothing of value visible in your car. GPS navigation systems are especially popular these days, commanding better prices on the street, and more easily removed, than radios and the like. I hear that thieves will even look for the telltale sign of a suction-cup ring on the inside of the windshield to detect the presence of a GPS system in the car.

But let me investigate two questions here. First, how does the rate of theft-from-auto here compare to elsewhere in the city? The crime is so common in this area that surely it's exceptionally high, due to the unhappy combination of high-income automobile owners living close by neighborhoods of low-income, alienated youths who have no compunction about stealing from others. Second, is the rate increasing recently? One hears that said, by people seeing all too many of those puddles of broken glass.

To address the first question, here's a chart showing the theft-from-auto rates (reported incidents per 1000 residents, per month) for the various PSAs of the Third MPD District, for the year 2009, through October. Well, there's Mount Pleasant, PSA 301, way at the bottom of the chart. Despite the notoriety of automobile break-ins in this neighborhood, the rate of such incidents is actually relatively low, lower than anywhere else in the Third District, lower than the average for the city as a whole. I guess we can't complain too much. 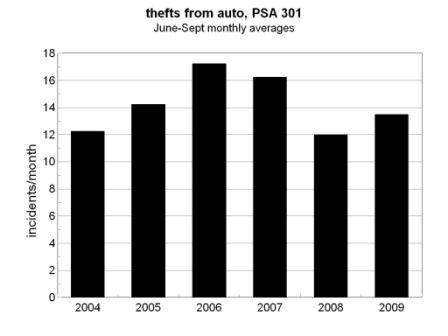 Columbia Heights, PSA 302, has a rate half again that of Mount Pleasant, and higher than the DC average, but still lower than the Third District average. Remarkably, it's Dupont Circle (now PSA 208, formerly PSA 306), and Logan Circle (PSA 307) that have unhappily high rates of automobile break-ins.

PSA 305, Cardozo-Shaw, is way ahead, with a break-in rate about four times the DC average. What drives that chart-topping theft rate, I don't know.

Next question:  is this problem any worse now than in the past? To answer this question, I compare averages over several months of the year, namely the good-weather months, June through September.

For PSA 301, it's apparent that there's no overall trend. The rate went up, then went down, now seems to be up a bit, and is not much different from its value five years ago. 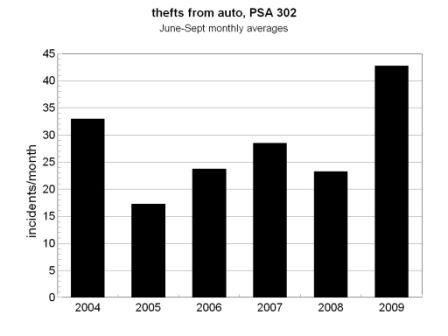 The trend in PSA 302, Columbia Heights, is different, if only in the current year. Perhaps the best description of this data set is that the rate wasn't changing very much until 2009, and now there's a modest automobile-break-in crime wave under way. Perhaps this is because gentrification is bringing more upper-income families into Columbia Heights, bringing with them more cars, and so more targets and temptations for the rather numerous residents of the area who, lacking any means of making a good living, and having little to lose if caught, indulge in petty theft. Such is life in the inner city.