A police crackdown on a mythical robbery wave

The police work hard, and do their best, no doubt. They should be the first to be dismayed at being sent out to expend extra effort on a mythical crime wave.

In the spring of this year, the papers were crying alarm about a surge in robberies: “Robbery is up more than 30 percent in the District in 2012, a jump that has forced police to redeploy resources, shake up tactics and urge residents to provide tips and act as witnesses in investigations” (Clarence Williams, the Washington Post, March 19, 2012). This was following the lead of the Washington Times, claiming that Violent crime in D.C. surges in 2012 (Andrea Noble, the Washington Times, February 19, 2012). I've already shown that these claims are nonsense. There was no wave of robberies sweeping the District; these naïve reporters were simply comparing 2012 to 2011, noting a large change, and deducing that that was a “surge”. What they didn't realize was that the 2011 numbers were abnormally low, due to severe winter weather, and the “surge” in 2012 was merely a return to normal. 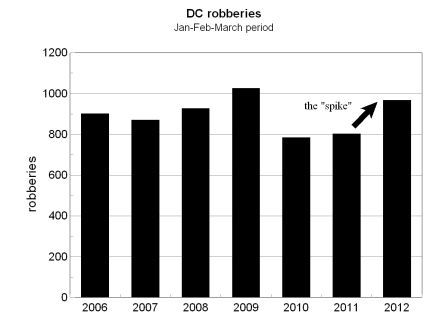 A chart of the number of robberies recorded in the District during the first three months of the year shows the drop in robberies in bad-winter years. One measure of how hard a winter is is the amount of snow. Here are totals for January-February-March:


2010 was the big one, “Snowmaggedon”. That's also the year of the abrupt drop in robberies, a 23% drop, to the lowest count observed in the 2006-2012 period (the time frame covered by MPD on-line statistics). I know of no better reason for this abrupt decline than the terrible weather of that winter.

2011 was, perhaps surprisingly, not much different, but in 2012, the robbery count returned to normal. Between 2006 and 2009, the District averaged 931 robberies during these winter months. In 2012, the year of the “spike” in robberies, the count was 968, just 4% higher than that four-year average. The 2012 robbery result was not a “spike” or a “surge”, but was merely a return to normal after two very abnormal years.

The newspapers, and the Metropolitan Police, disagree, claiming that there really was a crime wave, and they've successfully beat it down: “Police credit a range of tactics for helping slow the rise” (Mihir Zaveri, the Washington Post, July 1, 2012). 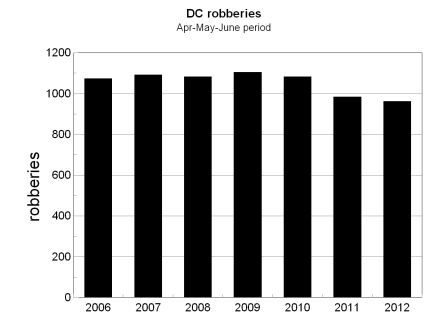 Well, let's look at the robbery counts for the second quarter of each calendar year, April-May-June. One thing about these months, snow isn't going to be a factor, not in DC. The robbery counts in 2010 and 2011 are not depressed, so there is neither a sharp drop, nor a return-to-normal “surge”, either. The only apparent trend is a modest decrease in 2011 and 2012.

Perhaps the most significant conclusion to be drawn from this chart is in a comparison of the 2011 and 2012 robbery counts. There was, certainly, an intensive effort in 2012 to combat robberies. That effort wasn't there in 2011. So we ought to be able to determine the effectiveness of the MPD “crackdown” on robberies by comparing 2012 to 2011.

One has to speculate as to how many robberies there would have been in 2012, had there been no MPD “crackdown”. Would the number have matched the count in 2011, implying a 2% effect on robberies? Or would the slow decline evident in the 2009-2012 numbers have caused a decrease in the robbery count anyway? If so, then the MPD-crackdown effect could be even less than 2%.

Or one could suppose that 2011 was somehow an anomaly, and the robbery count would have increased to match the values of the 2006-2010 period. Next year, when we have 2013 numbers, perhaps we can say more about that.

Right now, the best estimate is that the MPD crackdown on robberies reduced the robbery count by about two percent. Essentially, there might have been about 20 more robberies, had the MPD not “been working tirelessly to address the robberies throughout the city” (Chief Lanier).