"Advise" is the operative word. The ANC is not your neighborhood government, and it has none of the powers of either the legislative nor the executive branches of government. All it does is consider proposed District actions affecting a neighborhood, and offer advice to the District government concerning those actions. The District agency receiving such advice is supposed to give that advice "great weight". Some are reasonably responsive to ANC advice; others pretty much ignore it, and there's no penalty for that.

There are 37 ANCs in the District (here's a map of them), and a total of 270 elected commissioners. The position is unpaid, and it's hard to find people willing to spend a lot of their time at this job, for nothing. I paid little attention to our ANC, until they surprised me in 2000 with a very unfortunate decision affecting me and my immediate neighbors, without a word to any of us. (I continue to hear the complaint that residents don't know what the ANC is doing. Yes, I've been a victim of that, myself. I do what I can to overcome that communications shortfall.)

The ANC commissioners of that period were utterly unrepentant, and in 2002 I decided that our ANC needed a new voice. If the ANC system has a failing, it is that these positions tend to be dominated by a handful of neighborhood activists, while the great majority of residents are much too busy with home, family, and jobs to spend time on neighborhood "politics". It's proven to be quite difficult to make our ANC truly representative of the neighborhood, because so few residents have the time, energy, and inclination to take on the unpaid task.

In 2002, with my physics career winding down, I decided to run for our Mount Pleasant ANC, and found myself elected to that position. Curiously, in that election year, all six Mount Pleasant commissioners declined to run for re-election, so the new ANC started work in January, 2003, with six novice commissioners. That made for a rough start. It takes a year or two for a new commissioner to become an effective commissioner, familiar with regulations, procedures, and DC Government officials.

I brought about two significant changes, intent on improving neighborhood awareness of ANC activities. First, I provide a monthly newsletter for my constituents, listing all of the ANC actions, so that they can know what their ANC is doing, even if they never attend a meeting. This is hand-delivered, 720 copies, to every household in my single-member district. Nobody's ever done that before, and, so far as I know, I'm still the only ANC commissioner in the District doing that. Second, I publish every ANC resolution on two public Mount Pleasant Web sites, so that everyone in the neighborhood -- those with Internet access, anyway, which these days means a pretty substantial number -- can keep track of what their ANC does.

My newsletters are posted here. Our ANC also produces audio recordings of its meetings, should anyone want to find out exactly what was said at a meeting. (Our minutes are, as they should be, simply records of official actions taken, and do not record discussions.) These audio recordings are here .

The larger totals in 2004, 2008, and 2012 reflect those being presidential election years, thus bringing more voters to the polls. Sometimes it is argued that ANC votes don't mean anything, because the totals are so small. They're small only because the number of voters in an SMD is small. A single-member district is supposed to hold roughly 2000 residents, meaning perhaps half that many adult-age voters, and with normal turnout, a total of seven hundred votes is quite substantial. In the two precincts that cover Mount Pleasant (and a bit of Columbia Heights), the total votes cast for ANC commissioners amounted to 75% of the total votes cast for "major" offices, e.g., mayor or councilmember. So yes, the vote for ANC commissioners is meaningful. And my vote totals are larger than obtained by any other Mount Pleasant commissioner, and, for that matter, larger than received by any other ANC candidate in Ward One. I take that as an indication that I'm doing okay at this job. 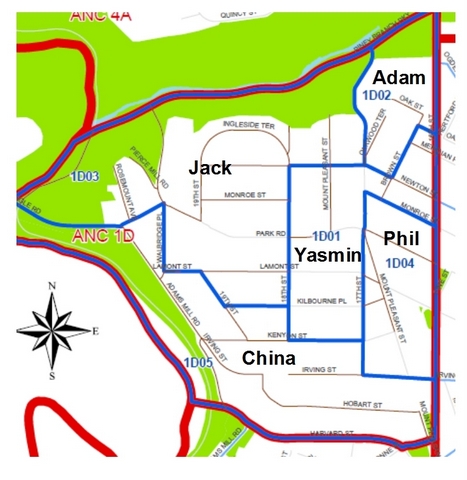